Change out your Mint hard drive to an SSD hard drive

So new SSD drives are sexy, and now pretty good in terms of reliability. And the prices are down, too.

I use Linux Mint Rebecca 17.1 for my work machine. I had two 500g hard drives, dual booted with grub2. So this is how I swapped out my Linux drive to an SSD. Why? For games dude, why else?

I plugged in the Crucial 256g SSD drive to the system and booted into Windows 7 from the grub boot loader menu.

I installed Acronis, a drive migration and backup tool, which came with the Crucial SSD drive. I downloaded it off the web per the enclosed instructions.

I then used Acronis to copy the Linux drive to the Crucial SSD drive.

Then I shut everything down and rebooted off of a DVD (or USB drive) into a Linux Mint live distro.

Once booted, I ran Gparted and copied the UUID of the new Crucial SSD Drive.

I ran Gedit as root and edited the grub boot menu text file on the Crucial SSD Drive, replacing the UUID of the first couple menu entries with the Crucial SSD drive UUID from Gparted.

I shut down and removed the DVD, and rebooted. Your system should reboot to the boot loader menu.  I then selected Linux and booted all the way into the SSD drive Mint Linux desktop.

I opened up a terminal as root and ran update-grub to finish out my grub menu updating.

I looked at using clonezilla in Linux and DD from the command line, but your partitions need to be the same size or larger on the target drive, and I am way too lazy to deal with that!

Blogging from the Win98 wall computer..

This is a blast from the past. This is being written from my Celeron wall computer running Win98. You really have to jump into win98 to realize how far we’ve gone in the past few years. If I could get a browser to work with Win3.1 I’d be using that! 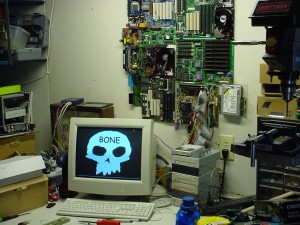 Internet Explorer 6 is really funky. I used to love it, but that was before Firefox, extensions, flash and innumerable other things. I don’t really understand why I haven’t been hacked yet. Maybe Win98 isn’t the target anymore. Chasing after XP machines has to be more rewarding for the bad guys.

My wall computer is just a motherboard screwed to the wall with drywall scews. Probably not good for electrical shielding but everything seems to work ok. No problem with overheating either. I’ve got lots of other electronic junk screwed to the wall also, old cameras, hard drives and half a dozen other motherboards. Some, like this celeron, still work good, but I really haven’t thought up any good things for them to do. Maybe later.

I just hate to let anything die. Maybe it’s time to dust off my old Amiga 1000. Don’t think it has a browser either.

So my friend is throwing out an old IBM Celeron powered Laptop. I intercepted it before it became trash. Not much to talk about, a couple usb ports, really small harddrive, small everything, battery dead, etc.

It did have a PCMCIA network card. First I loaded Damn Small Linux, and it all worked fine. I connected to the internet, did a little research on Newegg, and ordered a linux compatible Edimax PCMCIA wireless card for $19 bucks. DSL however, wouldn’t recognize the card. I found myself in NDISWrapper hell. I did have linux drivers, but they wouldn’t compile, and this is documented in multiple discussion forums.

I decided to try loading several distros, to see if any of them would recognize the card. I loaded PCLINUX, which looked great, but no see card. I tried SLITAZ, same result. I tried Ubuntu, etc etc. No luck. Then I tried Freespire. Finally, success. Freespire took about 30 minutes to install, and it was painless. It immediately recognized the PCMCIA Card. I setup wireless networking, with WEP (WPA is still flaky in this distro) and then installed the network printer. I now have the laptop downstairs in the “man cave” for access to the internet, etc. If I wasn’t so cheap, I’d buy a battery of Ebay for $50 bucks. Or I may hack it myself. It’s a Nickel Metal hydride battery, pretty easy to replace. Maybe Someday…

Last night, I took the plunge and upgraded from 8.10 to 9.05 Ubuntu. This has been the smoothest upgrade of all. I only had to add the boot parameters for menu.lst for my windows drive. Sweet. Everything works, video, sound, etc. Everything. Things do get better with age!

About two years ago, I switched to UBUNTU LINUX on my work machine at home. I also loaded the server version onto a couple boxes in the basement. I switched because I wanted to try something new, and I saw the programmers that I worked with use LINUX for everything. I was also paying about $400 bucks a year for a Microsoft Action Pack subscription to get copies of the latest and greatest software, that I used less and less.

So how has it been? Fairly smooth, with some caveats. One less than smooth spot early on, was the Nvidia driver chase every time the kernel and headers were updated. Usually I had to go through a short but irritating reinstall of the correct driver, to get my high resolution back. Lately this problem has disappeared. Now, I am running two monitors off the same card, using twinview, and it rocks.

I have a couple programs that I haven’t swapped for LINUX equivalents. For that, I have a dual boot option in GRUB, the boot loader, so I can also boot into a WINDOWS XP system if needed. This was another rough spot. Searching discussion forums to find the correct combination of parameters to boot the windows drive was lengthy. The windows drive was IDE, and the LINUX drive was SATA, which was also tricky initially. I also found my motherboard wouldn’t support SATA and IDE together, even though the documentation said it would. I had to install an additional SATA controller card to fix this.

The latest rough spot was when they last pushed out a kernel and header update. My machine failed to find the boot drive. Once again, after searching discussion forums, I found the correct delay parameter to put into GRUB. Now it boots reliably.

I seem now to have experienced all the big problems with a LINUX UBUNTU system. Bear in mind, I have relatively old hardware, such as the Athlon XP 3200 processor. Installs on newer hardware have all gone perfect, and so have all the updates. I have even installed Simply Mepis and Damn Small Linux on systems, and they are working flawlessly. I can place DreamLinux on a thumb drive, and take it with me anywhere.

I use OpenOffice applications for general business, and it integrates well with MS Office. For the one windows program I haven’t migrated to this point, I use VMWARE to load a copy of windows XP, and run the program in there, rather than booting to the old Windows Drive.

Now I just have to put up with my coworkers telling me ‘I told you so”. I’ll pay that price. 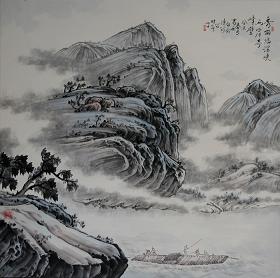 If you want an account on the Spechtacle, you may:

1. email rademacher@armoredplanet.com and request one

2. register in the Spechtacle, and we will approve your joining the fray

3. send a million-billion dollars in a suitcase to 105 Blueball Road, Rineyville Ky 40162

Feel free to skip right to number 3, if you have a suitcase…

I got this new racing game where you can totally customize cars and paint jobs. Did this for the families love for saabs, and my love of our game. Enjoy! – david

David at the Game Developer Conference

I spent the week of March 5th in San Fransisco at the 2007 Game Developer Conference. I went to classes, lectures and seminars by game industry vets, and partied at night. Here are my pics from the trip http://www.flickr.com/photos/65226059@N00/tags/gdc/

I watched 300 while i was out there, man what an awsome movie. Not for the faint of heart, if decapitations and mass slaughterings turn you off, i would pass on that one.

So now i’m back in Atlanta and back to work as usual.

The above link is to a Story on PC Modders and German computer cabinet maker Nicholas Schmidt and some of their gems they have made?
>

Then there were these guys from the Austin Modders club..