Car guys in the Nam…

I got dropped into Vietnam at the tender age of 21 or 22. Of course all the young guys were car guys, but mostly the talk was of hot american iron…. I was the weird guy who liked foreign stuff. 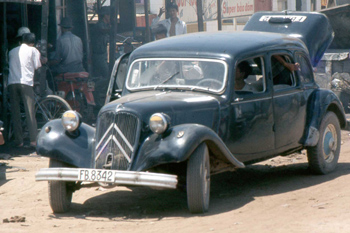 But all the foreign stuff in Vietnam was old left overs from the French occupation. But it was still neat stuff.. Citroen Traction Avants from the 50’s were everywhere but was hard to find one in good shape. Those cars are still there. In fact, you can still hire restored examples of these cars from the Hotel Sofitel to tour Hanoi. 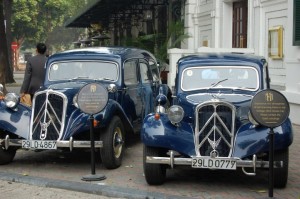 All the trucks and buses were old French things too. All the big commercial trucks were worn out, sometimes you see them shaking violently when getting over 35 mph or so. It’s only natural I guess, when a 1st world country leaves all it’s stuff in a 3rd world country, it gets used till it quits. The buses were everywhere too.

Neat little Renault Goelettes and Saviems puttering up and down Highway One. 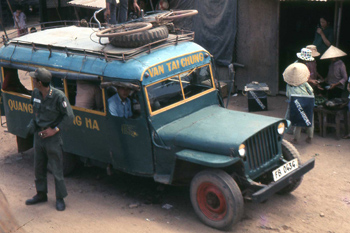 The Vietnamese could make a bus out of anything!

But the coolest Veitnamese drove (or were driven around in) American cars. The commander of the 1St ARVN, General Phu, had a black ’59 Chevy staff car. And it looked new. Another guy I used to hang around with had a ’57 Plymouth, and it had absolutely no glass left in it. But he didn’t care, cause he was the coolest guy in Hue city! Even a few of the white mice (civilian police) rode Harleys. 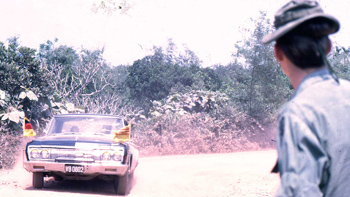 Since then I rarely owned any American cars. I got my first MG when on leave in 1972 and never looked back. Now if only the French could work on adding a little reliability… 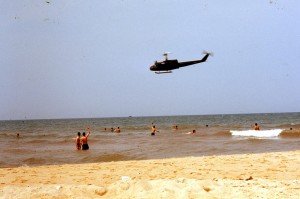 Some time around March 1971, the higher ups decided we needed a break. The U.S. Army had a beach set up just for this purpose. It technically was the 101st Airborne’s beach, but since we were all on the same side, they let us use it. In Country R&R usually lasted about 3 days and ours did but just barely. It was pretty cool, ocean front property. The only indications of the war was the constant buzz of helicopters whipping up the beach, and the vietnamese on the next beach over. They weren’t there for fun though, just fishing to get something to eat.

The first day started off badly. One of our guys broke his back body surfing. He wasn’t killed but his war was over and they hauled him off to Japan.

The next day was my turn. I was far out in the surf, when I noticed one of the helicopters that flew low along the beach was turning around. The gunship started wailing on the water just in front of me with all their machine guns at once. I couldn’t get out of the water fast enough. Then all the Vietnamese charged into the water and dragged the biggest white shark I’d ever seen onto the beach. There must have been 500 bullet holes in him. The Viets carved him up into steaks in no time. I had enough of swimming for awhile, and my hat was off to those chopper guys.

That night a typhoon blew in during the night and levelled most of the hooches we were staying in, including mine. There wasn’t anything to do but ride it out, and the next morning crawled out of the wreckage.