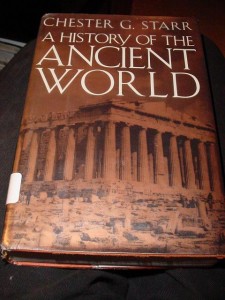 Been reading a good book lately, The History of the Ancient World by Chester G. Starr. I’ve been hung up on the transition from cave men to civilized men (?), and Chester’s book covers that transition up till the fall of the Roman Empire. This is arguably an artificial limit to ancient, but you got to cut it off somewhere.

I’ve learned loads of things I didn’t know about the ancient world, like a huge barbarian invasion (from who knows where) just before 1000 BC that brought the civilized world to it’s knees from Greece to Babylon and on to India. This precipitated a dark age that lasted 500 years before these areas got back on their feet. (I like a good dark age… I think were just entering one now.)

And the Romans having direct seaborne trade with India and China. It wasn’t a lot, A trip in a ship from Rome to China in 200 AD must have been pretty rough. It was rough on sailors in the 17th Century, much less the second century. But the thought of a Roman trading ship sailing into Shanghai harbor is pretty cool.

I’m wrapping up this book, and I’m getting close to the part where the Christian faith takes over the Roman Empire, but ol’ Chester just threw me a religious and philosophical curve ball… and I quote..

“Neoplatonism, as measured by Christianity, could not truly formulate a metaphysical explanation of human individuality in relation to transcendental unity, and it could not excise the defects of it’s pagan inheritance.”