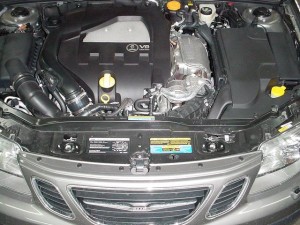 Since 2006, some select Saab 9-3s come with GM’s new (for the time) global V6 engine. For you techie types, the 2.8 liter engine comes to the U.S. with 250 hp (less in the ROW- rest of the world) and 258 ft. lbs of torque. For once the U.S. gets the hot engine. Made from a clean sheet of paper, its a 60 degree v motor (reduces vibration), 9.5 to 1 compression ratio (more power), and almost everything possible is made from aluminum (light weight).

This motor (B238L) was designed from go to be turbocharged, unlike it’s predecessor, B308 which was not. The B308 was an Opel engine that Saab designed some heads for, with belt driven cams and later ones had an asymetrical turbo run from the front bank of cylinders. This motor liked to shed belts and it’s belt drive mechanism was redesigned a couple of times. It was not well liked by technicians. You really didn’t get much power difference from the simpler 4 cyl cars either. The B308 came in some 1995-98 900 models, and some 1999-2004 9-5’s.

The B238L has some good features. The cams are chain drive, which all 4 cyl Saab turbos have been all the way back. The cams have variable drive, which is a way of changing the cam profile (something inherently unchangeable because the cams are cast in steel) for better drivability and power at different load conditions. The piston rings are stainless steel, the connecting rods are fractured (for more secure connection) and the pistons are graphite coated and oil cooled. This was all race car stuff just a few years ago. It’s a cool motor.

And the turbo is cool too. It runs 9 pounds of boost, and has a twin scroll design. Unlike it’s 308 predecessor, the turbo is symetrical (uses both banks of exhaust) and the twin scroll takes advantage of the exhaust pulses to spin up faster. The waste gate is electronically controlled by a pwm signal (pulse width modulated) from the engine’s ecu to keep the turbo spinning on lift off, for better response when your put your foot in it again.

However this engine completely fills up the space alloted to it. Technically this isn’t a problem, as the motor is not bigger than the space it resides in. But it does make for creative repair techniques when you can’t get your hands around it.

I guess you could say that Saab and General Motors aren’t so much car manufacturers as packaging companies.