No speedo… no sweat.. GPS to the rescue… 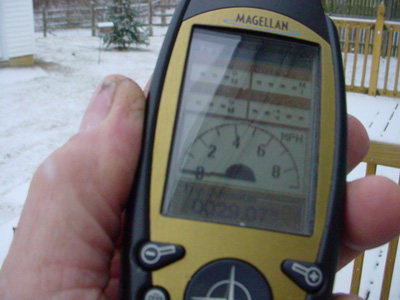 My speedometer in my Saab 9-5 quit last month. I traced the cause to a faulty brake control unit. It is the brain that controls the brakes when traction control and electronic stability control is in action. These are cool things cars have nowdays that really do help a mediocre driver keep control of his car. I don’t think it helps people that know how to drive, but is handy nonetheless.

The brake control unit (also known as the TCS) couldn’t read the wheel speed sensors anymore. This is how the car knows how fast it is going. This data is sent over the bus (the cars network) to all the other control units that need to know the wheel speed, such as the engine control unit (ECM) and the dash gauges (MIU). So now the speedometer doesn’t know how fast the car is going.

It took a week to get the parts, but in the meantime, I remembered my old handheld Magellan Sport Trak map GPS unit I had laying around. It had a screen that shows how fast your going, and since it was time based and corrected gps, it was a hell of a lot more accurate than the cars speedo. The cars speedo was calibrated at the time of manufacture and is based on lots of variables, including tire size. The tires on the car now are close to the rolling radius of the original tires, but not exactly. An error of 6% is widely accepted in the industry, and it’s always factored upward so that the car is always going slower than the speed shown. Car manufacturers don’t want their customers getting tickets all the time.

The gps was cool, because I always also knew my altitude. I was surprised to find my daily commute was also about 300 feet uphill. These gps units are digital, which means the price comes down dramatically every year, so cars should be getting these things to run their speedometers other than some built in algorithm. And it would be a lot more accurate.