The Russian Bully is back! 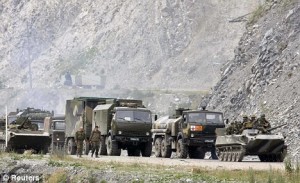 With the Russian invasian of Georgia last August, Putin was announcing that Eastern Europe was still their playground, and just dared anyone to do something about it. They have been chafing at the fact that all these little countries they have treated so badly in WWII and after have the gall to want to join Nato or get friendly with the Europeans, but who could blame them. The Europeans or Americans haven’t enslaved them, or subjected them to the menace of Secret Police, or impressed their citizens into work gangs in Siberia or the like. (At least not in modern times…)

I’m all for sticking up for the Poles, and the Checks, and the Hungarians, etc. The problem is the world is got so many screwed up places, and the U.S. Army is only so large. This would be a lot easier to solve if all the democratized countries were on the same team. Then we would have a large enough army to counter all these threats… (Easy for me to say, I’m 59 yrs old and not getting drafted again!)

Well I still have hope for the future. We may not be able to save the Georgians, but we want to. One thing is certain, the eastern European countries know who the bully is…