I used to watch Humphrey Bogart movies when I was a kid. Before he became a good guy, he was a not so evil bad guy for a long time. These movies from the ’50’s always had Humphrey carrying the time honored Smith and Wesson 38. 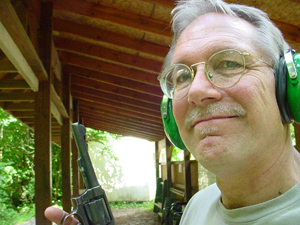 I got to shoot my old Smith the other day. This old gun sure has been around for awhile. It used to be owned by a guy who became a Jehovah’s Witness. They made him get rid of it and I was glad to take it off his hands. This gun started out in life as a 5 screw hand ejector, which places it before 1955. That’s when the butchers got hold of it. 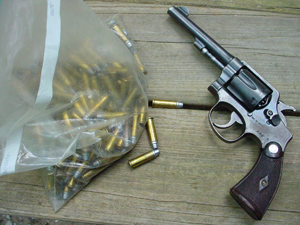 The caliber was .38 S&W, a short low power round that was popular before WW2. It was converted to .38 special during the fifties when it was done as cheap as possible. The cylinder was bored out longer to fit the new round. However the smaller bullet was also fatter, and with a .38 special loaded the cylinder doesn’t fit the bullet closely, leading to split cases, and a possible dangerous situation.

I replaced the cylinder with one from Gun Parts Corporation, and it took relatively little fitting to function. It turns out to be a great shooter! My only complaint is the skinny sight blade, which was normal for the time. Big fat modern sights are much better on my old eyes. However, I am happy to report that none of the beer cans that I was shooting at got away!