With the snow 5 inches deep outside, with another five on the way, of course I started thinking about Vietnam again. It’s 20 degrees here, but could get from 60 to 130 degrees there. I worked nights during the war cooped up in a 5 ton truck, but during the day I was free to roam around the country. So roam I did, and usually in the company of reporters.

They had vehicles, cameras, a nose for news and chased after the war. I was on foot, had a thirst for adventure, and they were glad to drag me along. As a rule they were pretty nice guys, and always had a beer to share. On the other hand, they had a propensity for taking you places that you later realized you didn’t really want to go to, especially when things got hot. 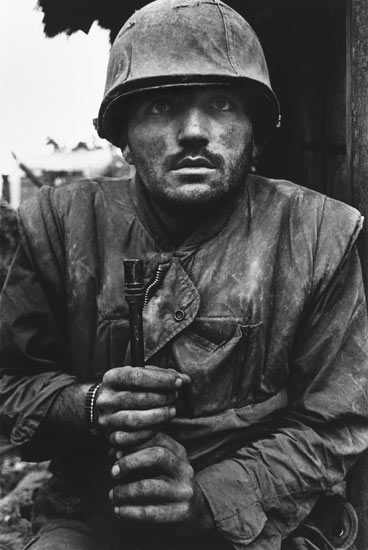 I caught this story in the Guardian about Don McCullin and some of the photographs he took during the war. A famous one caught my eye, Shell shocked US Marine, Hue Vietnam… since Hue was my base of operations I had to know more. The photo was famous for the haunted look of the marine, staring off past the camera, during a particularly rough battle during Tet of ’68. When I got there in 1970, all the holes were still in the buildings. It must have been a hell of a fight.

Other reporters were mentioned in the article, some famous, like John Steinbeck IV,the son of writer John Steinbeck. Another famous guy was Sean Flynn, the son of actor Errol Flynn. He’s not the Sean Flynn currently known in the movies, since he disappeared there in 1970 during the invasion of Cambodia by US troops.

Don McCullin was more like the reporters I knew, didn’t carry guns and were all business. Sean Flynn was a little more swashbuckling, like his dad and himself in some pirate movies. He carried guns, smoked a lot of dope, was fearless and stuck his neck out. The last time he stuck it out too far. You really couldn’t blame him. He was young, found adventure in an exotic locale, lived through danger and was free to do what he wanted. During the invasion of Cambodia, it was becoming clear he wanted to find out what it was like to be captured by the North Vietnamese. So he got his wish, along with reporter Dana Stone. They were captured in 1970 and never heard from again. 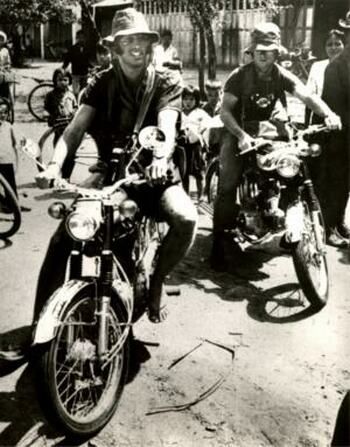 One friend of his, a Tim Page (who was the model for the reporter in Apocalypse Now) has probably done the best investigation of his disappearance, and figures he was killed by the Khymer Rouge a year after his capture. Reporter Tim King, who was a war reporter in Afghanistan, is putting together a documentary on Sean. Whatever happened, he’s dead now or he would have turned up somewhere. It makes you think about his judgment, but young guys in a war zone who smoke a lot of dope probably didn’t have the best judgment anyway. I know I didn’t. I did a few things I regret, but thankfully they didn’t kill me. I still think about roaming around with those reporters, and I’m glad they didn’t want to get captured. Thanks guys.

According to Fox News, freelance bonehunters may have found Sean Flynn’s remains. They have been turned over to the Joint POW/MIA Accounting Command for identification. Concerns have been expressed over the discovery, as the pair involved used excavating equipment and not forensic techniques to recover the remains. It seems there are freelance bonehunters looking for remains in Indochina, looking for a fee for their return.