The wife wants to go to Canada next year so off we go to get passports. My last trip overseas was on Uncle Sam, so a passport was a new experience for me. It finally arrived in the mail and looks pretty hi-tech, so I delved into it’s properties. 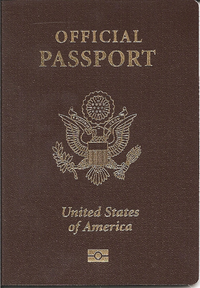 It has a machine readable code on the data page (the one with your picture on it) so scanners can read your information. This has been a feature since 1981, but I had noticed this small block on the front. This block signifies an inclusion of an rfid chip, which has been in passports since 2007, and this includes certain biometric data about me, and even my picture is encoded.

This chip was originally mandated as a way to speed up the immigration process by making scanning easier and faster. The rfid chip is just a more modern machine readable code, but now the digital world makes it easier than ever to steal your identity. Any rfid reader can read that code, and the more power the reader has, the farther away it can read the data. To deter that problem the cover is supposed to have a radio frequency shield to deter unauthorized scanning of your passport. However all this goes away when you open it.

There are projects afoot that will encrypt the data so that only authorized readers can access it, and being paranoid I think this is great, but I suspect this will only lead to escalation by the bad guys. With every digital hole that is plugged they seem to worm their way into another one.

Digital parasites have evolved alongside our technology. Parasitism is a way of life on this planet, and it bothered the dinosaurs as much as us. This may seem that we are locked into an evolutionary arms race now between white hat and black hat hackers, and maybe if one side or the other wins, we may all be the losers. Maybe we need predator hacker scumbags to make us stronger, much like the constant warring between europeans made them (and us) the dominant power on this planet.

For now, I think I’ll wrap my passport in aluminum foil.