My short lived time as a short order cook… 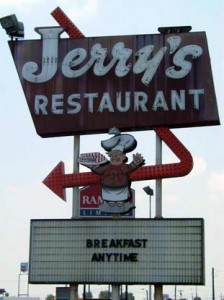 Back in 1969 I lost my draft deferment when I graduated from a local two year college. While I was waiting to get drafted, I realized that no one would hire you. Who wanted to invest training or whatever in some guy that would be in south east asia in 3 months. So when a friend who worked in a restaurant told me they needed a short order cook, I jumped at the chance.

What I knew about cooking at the time (and now) could be summed up in two words. Fish Sticks! I could cook anything at 350 degrees for 20 minutes. Or so I thought.

Things went along kind of OK till the night of the Green Mayo. I didn’t realize at the time that mayonnaise had to be refrigerated and that green wasn’t it’s normal color. The next night the proverbial you know what hit the fan. About 25 people had called in wanting us to pay their hospital bills for food poisoning. Needless to say I got reamed pretty good.

About that time, My uncle Fred and aunt Boot dropped in to support their nephew and get something to eat. Pretty bad timing. The waitress told me they were there and wanted to see me, and see about what was best on the menu. I couldn’t take it. I confessed my abilities were a little less than stellar and convinced them to eat somewhere else.

They did… and I was drafted soon after that anyhow. Somehow I never got around to learning to cook. Its intricacies have always eluded me.

My wife is a pretty good cook though. Thank God!