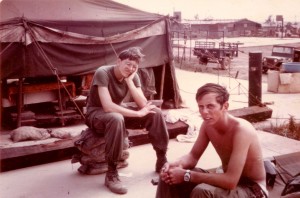 Sometime in March 1972, The 101st Airborne left Vietnam for home. This left a huge army base deserted and the 1st ARVN Division decided to call it home. A South Vietnamese division has lots of American advisors, including our intelligence team, so of we went to our new home.

The first thing you see when you enter a recently evacuated American army base in Vietnam is dogs. Lots of dogs. I think every GI over there had a dog. Our detachment had 10 guys and we had 2 dogs. Some army communications guy from TOC named Lt. Pappas was assigned the job of shooting all the dogs. He kind of liked it, and earned his moniker “Mad Dog Pappas.” Nobody liked him…

Traded a .38 S&W for a homemade go kart… I coulda just waited till the Airborne guy left… but it was cool. It was made out of a ‘mule’, a kind of mobile basket with a 3kw generator engine on it, and it was used originally to unload planes. It was welded up with a seat in the middle and the motor in the back, and a big 101 Airborne insignia on the tank… No suspension though, and it would beat you to death. General Phu told my CO that he wanted it for his kid… but it kinda got wrecked before I handed it over.

Freaked out one day, my hooch was close to the perimeter and the patrol found a spider hole just outside. How long has this guy been watching me. They found rice and rifle in the hole too. Gives you the shivers.

Trying to find a place to smoke dope. Our new CO was an airborne ranger… we weren’t used to these guys, and they didn’t like punk kids like me either. One night we crawled up our radio tower, enjoying the scenery when 122 rockets started coming in, in a straight line for our tower! They must have been sighting on the helicopter beacon, I smashed it with my rifle but and came down the tower in seconds. (I think it was pretty high too…)

Wandering around the base at night, we came on an ARVN tank crew sitting around their fire. We got to drinking with them, and they showed me how their tank worked. It was an American armored car with twin 40mm guns in the turret. These were usually used for convoy protection. Unlike their American counterparts, ARVN’s drilled a hole in the dash and put a key and tumblers in place of the American switch that anybody can turn on. They didn’t trust anybody, and they shouldn’t have trusted me, because I took off in it for a joyride.. They chased me for a while, but that thing was neat.. It could knock over trees and all sorts of big stuff. I finally gave it back…

Somebody gassed out Airborne Ranger CO. He had just gotten out of the shower and was all wet… gas will burn you when your wet. I think the real target was the mess sgt, who shared the hooch with him. I heard all the commotion out on the street and came out to see the CO dripping wet in a towel with his M-16 pointed right at me. “Pfeiffer” he says, “I know it was you…” It wasn’t me, and he didn’t shoot me, thank god, but it did steel my resolve to get even somehow. While down in Phu Bai I learned that they had 2 gas grenades for a M-79 in the company safe and traded the company clerk for them. That night we climbed up our tower again and pointed the M-79 towards the officers club (we learned he was in there) and let one go. Unfortunately the officers club was 400 yards away, and the gas round could go 200 at the most. But General Phu’s hooch was 200 yards away. Shame his whole family was in there.

The next morning, in my breifing to General Phu and our CO, I duly reported an incoming round of enemy gas during the night. General Phu’s eyes were still red. That night, with one round left, I was determined to fulfill my mission, and tucked the M-79 under my jacket and boldly walked past the Vietnamese guards to the compound and let her rip right through the officers clubs screen door…. mission accomplished. The next mornings breifing included the now regular round of enemy gas….

If I spent this much energy fighting the war, we might have won….