Movies have a way of altering reality to a different perspective, that takes no more work than the imagination. At least on our part. It probably takes a lot of work for the guys in the prop studio, and the cgi guys to make the whole thing believable.

It kind of makes you wish you owned a machine shop of your own to turn fantasy into reality. All that aside, these are my top favorite movie handguns.

Hans Solo’s Blaster..
This thing is a thinly disguised Broomhandle Mauser, which was built from the late 1890’s till about 1930 or so. Broomhandles looked like it was from the future when it first came out, and it still does. 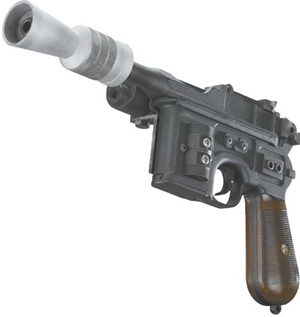 Bladerunner’s bolt operated pistol
A bolt operated pistol that is used for combat and not just target shooting is so contrary to modern design that I like it. It was built from a Steyr bolt action rifle and a Charter Arm’s .44 Bulldog. I found a fan who was hungup on the design and tracked down the original maker and produced one of his own.

Three Kings pistol
The big revolver carried by Spike in the 1999 war film “Three Kings” was a commercially available ‘Thunder 5’, with a huge cylinder meant to shoot .410 shotguns shells. If nothing else, it just looks bad. 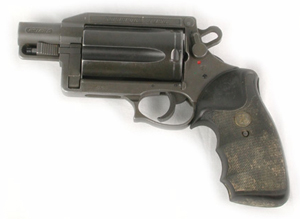 Robocop’s Auto-9
Robocops Auto-9 pistol was made from a Beretta 93R, a select fire pistol made in the 70’s for military and police use. In the movie, the gun was supposed to house a 50 round magazine (where did all those bullets hide?), but it really never seemed to run out of ammo. You almost think it was belt fed and it ran up his arm or something. 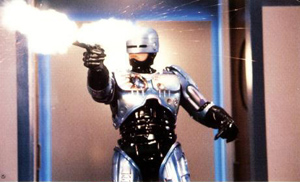 Hellboy’s Good Samaritan
The best handgun of all time is Hellboy’s Good Samaritan. It’s big, and it’s rounds are so big, it can only hold 4 of them. The cylinders are cut away so you can see the bullets, but in real life this would be a serious safety hazard. But safety doesn’t enter the equation since Hellboy typically hangs out in harm’s way. The bullets are loaded by Hellboy himself, and to kill his unearthly enemies, are loaded with white oak, holy water, garlic, and silver shavings. (That ought to just about take care of anything.) The gun itself is unique in that the grips are made from the True Cross, and the iron parts are forged from Irish church bells, cruxifixes, and blessed silver. 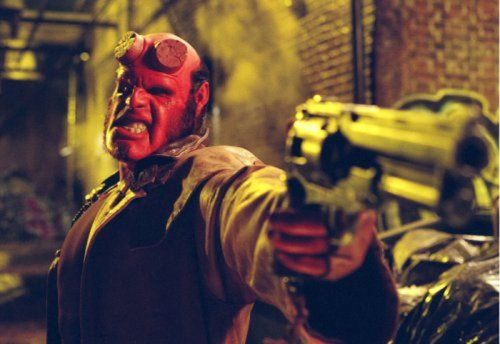