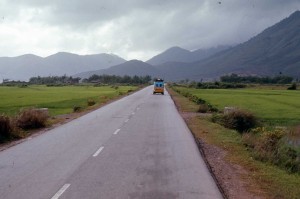 Sometime around march of 1971, Sgt Spence (our 1st shirt) took me and another guy or two (can’t remember) to Da Nang to pick up some crypto stuff or other. So we loaded up in our 3/4 ton pickup truck and headed south.

It was quite a panaromic view of Vietnam. Highway one runs down the length of the Vietnamese coast with all the major cities along it. Hue and Da Nang were the 2 largest cities in northern South Vietnam. We did plenty of sightseeing along the way, had a pleasant time in Da nang, and even saw the Seventh Fleet in the harbour. We saw the fleet from the tops of the mountains coming into Da Nang, and the aircraft carrier dwarfed the numerous ships with it! 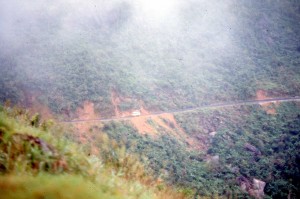 The trip back was another story. Spence was driving, and also drinking heavily. This seemed to be the curse of all top sergeants I have known. Spence was a special case tho, as he had been in the Army for 18 years, and curiously spent 17 of them in the orient. Supposedly, he had killed the wrong guy in his corner of Alabama, and his influential family shipped him off to the Army to save him from the authorities. I think he really liked it over there. So anyway, we were heading through the Hai Van Pass, the highest pass in Vietnam, with 2 of us in the bed of the truck, and Spence working furiously on his bottle of gin when the truck suddenly veered towards the small concrete abutment alongside the road. Sensing disaster, Whittley(?) had already jumped out, and I had just put my foot on the tailgate to join him when we hit the abutment. I fell back into the truck and knew this was it. Somehow the truck ran along the low concrete wall and jumped back onto the road. Whit was still laying in the road and it seemed hours before anybody could move. We were still alive!

We ambled up Higway One for hours, shooting at things and generally having a good time. Then our right front tire went flat. Spare was flat. We were in a pickle. We were hours away from home base and not in the friendliest part of Northern I Corps. So we drove up the road at 20 mph and the right rear tire went flat. Things were looking grim. Nobody was coming by, and we assessed our situation. We had 9 rounds left between us for our M-16s. Then we checked the M-79 we had with us and it didn’t work. The firing pin was broke. Yikes, it was getting dark so we drove on flat tires till we came to a Vietnamese strong point along the road. They were just setting up their claymores for the night, and we practically drove over them to get in. 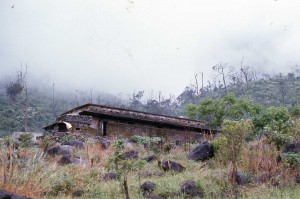 There was one American advisor with these guys, and they put us up for the night. The American guy had some movie for his boys so we all watched Love Story. The Vietnamese troops would go wild everytime Ryan O’Neil would kiss Ali McGraw. They also had plenty of beer! The next morning they fixed up our tires and gave us some ammo, so in better spirits we headed for Hue. Some time later we were running along the coast and found a great beach. So we decided to take a break to go swimming. 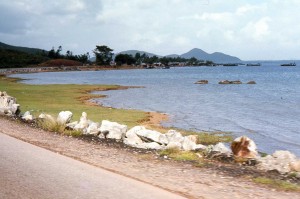 Spence decided to watch the truck so we shucked our clothes and swam out to some small island off the coast. The water was real shallow, and it was a long way out there. The passing sampans got a kick out of some naked GI’s sunning on the island. Then we noticed the truck was in the water! It took 20 minutes to get back, and we found the truck sunk in the water half way up the cab. Spence was asleep in the drivers seat. We woke him up to find out what had happened. He got homesick and decided to go home. He drove the truck straight towards Alabama till the water swamped the motor. We were in for it again.

A passing truck radioed our position to Phu Bai and they dispatched a wrecker to pull us out. Since we had a motor full of water they had to tow us back to Phu Bai. They couldn’t quit laughing when they found out what happened. The Radio Research station at Phu Bai was our parent headquarters, so when we got there, this Colonel chewed on Spence in a spectacular fashion. 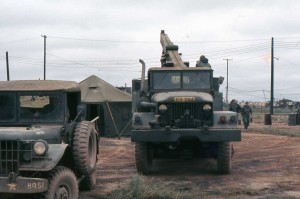 We finally got another truck and finished our mission, but I don’t think any of us really learned our lessons.