Intermittent Wipers… too much choice? 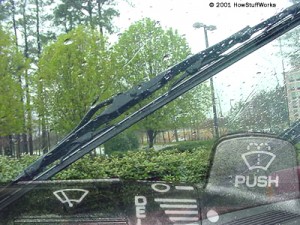 Driving cars way back in the Fifties, we were lucky we had wipers at all. The wiper motors were driven by vacuum, a source the motor only provided at idle, or at cruising speed. There usually was no vacuum when you needed it the most. Now wiper motors are powered by electric motors and are there for you always.

Sometime during that period they invented intermittent wipers. These were great! It always seemed that when it rained, it didn’t rain enough to leave the wipers on all the time, or it just rained enough that you couldn’t leave them off. My old 1990 Ford Van doesn’t have them. Leave it up to the Americans to make some crucial device an option!

But intermittent wipers have changed. Now they have a slider switch of some sort on them so that you can adjust the interval. You would think this would be great, as even intermittent wipers don’t always match the rain’s fury. It drives me crazy. Just having non adjustable wipers on my van is ok, but on my car I’m constantly adjusting the intermittent wipers…. I’m never satisfied.

Now they have rain sensing wipers. You would think this would be great, but alas it’s not. Now when the rain doesn’t match the wipe speed ( and being human, my perception is that it doesn’t, whether it does or not) you can’t do anything about it other than turning on the regular wipers. It’s up to the computer, not you.