This simple little device was wired up to test how long an led would run on some old used c cell batteries. The date inscribed on the batteries when it was built was 7-18-07. It quit last night, 4-30-2010. 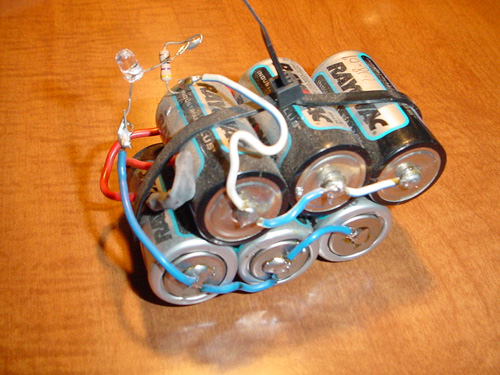 It sat around at work till I got tired of looking at it. It just kept going and going and going. I put it inside the window of my garage, where it served as a poor man’s alarm system, in which it acquitted itself admirably. But now it’s dead, and I need to find some more used c cell batteries.

It’s not immediately obvious that this alarm thing really worked, however. I haven’t been hit yet, and don’t want to be. Real alarms are dubious anyway, since Police Departments already have enough to do. Maybe I can get a recording of a barking dog or something. I wonder how many c cells that would take?