I like electricity. I like everything it does for me, between listening to Neil Young on the Ipod to firing the spark plugs and fuel injectors in my Saab. But for the guy who has to fix his own car, it has a price. 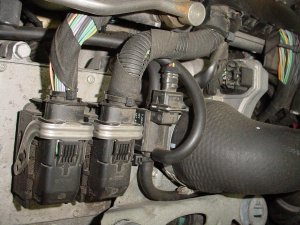 And that price involves connectors. No matter how your car is set up, things have to be plugged in, and therein is the rub. I saw some statistics somewhere that electrical problems consume 80 percent of warrenty expenditures. And of that 80%, the majority is connection problems. Auto engineers are hot on the trail of this problem too, but they are really getting on my nerves.

They have made some progress though. 40 years ago, there was only one kind of connector. For each wire. And these connectors could be plugged into anything, so you really had to have some kind of idea where they went. This wasn’t to big of a problem because there were few wires.

Then they started gathering wires into groups. There were connectors with 2 wires in them, then 3, 4, 5 and up. However, all the 2 wire connectors were all the same, so you wouldn’t be able to plug a 3 wire connector into the item, but any 2 wire one would fit. You still had to know where the wires all went.

Engineers finally got the problem, and now no 2 connectors will plug into the same thing. Every last one is different, even though they might look the same. One problem solved, and another problem resulted from this.

Now connectors hardly ever fall off, but we have new problems. Getting them disconnected. Engineers have bent over backwards to devise locks and even extra locks to keep them from falling off. But sometimes to fix something you have to take it off. And trying to figure out how this or that lock even works is almost a race against your sanity. With the advent of unique connectors for every electrical item in the car comes a unique lock solution for that individual connector. And worse that that, Engineers have devised an extra lock system that locks the original connector lock. This is called the quality assurance locks.

Now, I really have to study the connector to figure how it comes apart. And every now and then I don’t figure it out and end up destroying it. (Oh Well…) I’ve got this problem right now on a vacuum motor for a brake booster on a 2008 Saab Combi. I still haven’t figured it out, but a new motor is coming in tomorrow. Maybe I can get some clues from that…