Anzani… Cool Engines… but not as cool as they could be… 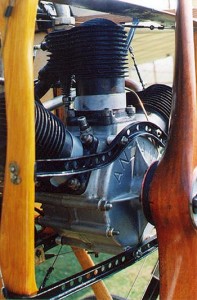 The Anzani 3 Cylinder engine made Louis Bleriot famous. He was the first guy to fly nonstop across the English Channel. Back in the early days of flight, having an engine light enough, with enough horsepower to get an airplane off the ground, was the Holy Grail. It was a 3 cylinder semi-radial engine and had 25 horsepower, not a lot, but enough.

Bleriot designed and built the type XI in 1908, but fitted the Anzani engine in 1909. Happy with the results, he decided to try for the British Daily Mail prize of 1000 pounds for the first crossing of the English Channel by air. The problem for Bleriot was the engines problems with overheating… it could be guaranteed to run at least 20 minutes. But that wouldn’t be enough.

He took off on July 25th, 1909 and headed for England. He handed his watch to his friend and said that there was no use ruining a perfectly good watch (since he probably was going to ditch in the channel). All went well till about 20 minutes into the flight when the engine overheated and locked up. As the plane slowly descended to the channel, a rainstorm blew up, cooling down the motor, which Bleriot restarted and finished his flight into history.