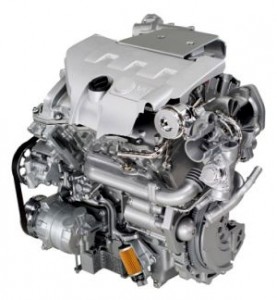 There once was a time not so long ago where if you had taken a car’s engine apart for some serious rebuilding, that half the work was getting it running good again. You had to massage the mixture, cajole the timing, and usually had to accept some irregularity or other. That stuff is all over.

As long as you put everything back together properly, and without adjusting anything, all you have to do is hook up the battery and turn the key. The engine comes to life immediately, with no hint of it’s latest major sugery… and not only just run, but run good. (disclaimer: the mechanic does have to put it back together properly…)

One interesting thing about computerized engine controls are the idle motors. Back in the 60’s and 70’s getting a car to idle approached something of an art. You had to balance all the factors involved to get what you wanted… did you want it to run clean, or run good? You usually couldn’t have both.. now you get it all. Idle motors work good, so good in fact that they rarely fail, and if you start your car and put it in gear and lay off the brakes, your car will idle itself at about 6mph to Los Angeles if you have enough gas.

Engine computers will also tell you whats wrong with themselves also. Engine failure codes were sparse and not very informative in the 80’s. For example, you would get a code like 42492.. which meant the mixture was incorrect on driving. This could mean anything that had anything to do with the motor could be at fault. It was like having someone tell you your cars running bad. You already knew it. And the fault code list was limited to about 20 generalized codes. Now the number of codes for an engine system runs into the hundreds and are much more detailed as to the fault.

The reason you need codes in modern engine systems is somewhat akin to the larger picture humans have to deal with in modern life. And that is, things are not intuitive anymore. A hundred years ago, the average mechanic could understand everything about the machines he worked on, because you could see the problems and relate to them in a physical way. Now you relate to the problems on a theoretical level, and you have to trust your machines to tell you what’s going on. But it is a miracle it works at all, much less works as good as it does.

We don’t even think about it, and we don’t need to, till it hiccups…