Cars and the fall of the Berlin Wall… 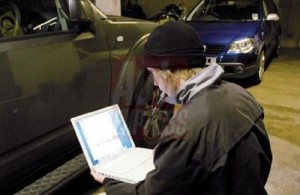 In case you haven’t noticed… cars have undergone a huge change lately. Security. Your key looks like something from Star Trek now, and is hooked by antennas and links to a brain lurking somewhere in the car ready to deny you access at the drop of a hat.

And it doesn’t stop there. Almost everything is an electronic control unit in car nowdays, the window switches (Drivers Door Module), the sunroof motor (Sun Roof Module) and even the turn signal switch. (the Column Integration Module) And worse than that, they’re all on a bus so they talk to each other (like your home network). They all have the car’s information programmed into them, so that when something is amiss, like someone replacing a module, alarms start to go off and the car shuts down.

To replace some module nowdays, you have to go through elaborate security precautions, some instances it is a hardware key attached to a computer and only available to authorized dealerships. And what started all this, you may ask?

The fall of the Soviet Union, that’s what. Car theives were always a problem of sorts, and the car companies did address that issue to make cars harder to steal. But it was a relatively stable problem. In 1989, when the Soviet Union went out of business, a lot of engineers and other smart guys from the eastern bloc were suddenly out of work. High end cars started disappearing all over Europe, and it was so bad that all the Euro companies got together and came up with draconian measures to stop the thieves.

I doubt that their measures will completely stop car thieves, but it does slow them down a bit. The other side of the coin is, your key module now costs a thousand bucks, and you have to get someones permission to replace a control unit in your own car. I personally like to empower the consumer, but I guess if everyones car gets stolen, thats not a good thing either.