Car Safety… a look back 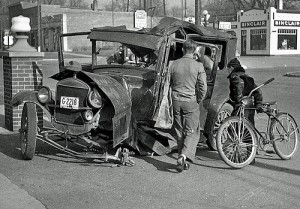 As a Saab Technician, I really get a feeling of being indestructable as I test drive new cars. The brakes are good… the belts hold you in and there are airbags all over the place. (At least 6 bags in the 9-3’s.) This is a false feeling as there are other things on the road that are killers, like semi-trucks.

But cars are a lot safer. My grandpa, Art Specht, got involved in a wreck in a Model-T Ford when he was younger. From what he says, a huge spike of plate glass cut up his face. There is a lot to be said for safety glass.

Seat belt are another thing. My first car, a 1952 Ford, had no belts, and when they started putting them in, I thought they were a nuisance. I only started using belts because I had a bad habit of driving absolutely as fast as I could go. I’m over all that now, however I wouldn’t think of crossing the street now without seat belts…

Then there are dual master cylinders. Up until 1968 or so cars had a single hydraulic circuit to feed all the brakes. This is fine till something happens, like a blown wheel cylinder or a failed seal in the master cylinder or a rusted out line. Then you have no brakes. (Well, you did have an emergency brake, but did you ever try to stop a car with one? Not to good.) I lost a Corvair like that, in order to stop I had to run into a building. (It was a Police station at that, but that’s another story)

Now cars have all these safety items, including stiffer cages. Not long ago a Saab Convertible rolled over a couple of times, and the roof didn’t collapse. And you could still open the doors. That would have never happened to a convertible made up to the seventies.

However, human nature being what it is, you would think this would lower the accident rate and whatever. Insurance companies used to give a discount to people whose cars had this safety equipment but they no longer do. They found out that people think they’re safe so they just drive faster…