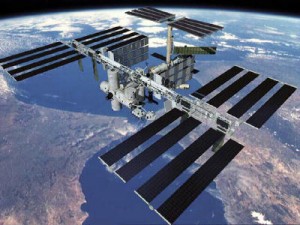 One of the recent Space Shuttle Discovery’s missions was delivering a new toilet pump to the International Space Station, to fix its troublesome toilet. Watching the docking on Nasa TV http://www.nasa.gov/multimedia/nasatv/ was breathtaking!
It seems space stations have come a long way since the old Salyut and Spacelab days… For instance, the Salyut 6 had 90 sq meters of habital area, ran on 4kw of power, and could barely cram 3 guys inside it.

The present International Space Station, by contrast, has about 700 sq meters of area so far, with another 300 on the way, runs on 110 kw of power, and the new Japanese labs interior can strand an astranaut if he loses a handhold and drifts out into the middle of the room!

These space stations still have their problems tho. Recycling issues, radiation from space, and a lack of gravity still cause health woes…

And they still only have one toilet!