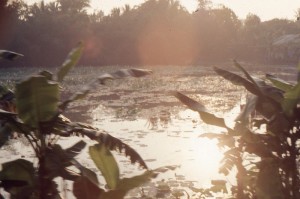 Not too far away the NVA had advanced to the My Chanh river during their Easter offensive. I was hanging around with some Time and Life guys, who were on their way up to the river to cover the story. Our side of the river was covered by Arvns (Army of the Republic of Vietnam), the other side was manned by how many? Who could know, you never saw them. Could have just been one guy banging away with an old Maxim gun.

Then things got started… a couple of Cobra’s made a run at the other bank from behind us. A rocket fell short, blowing up a couple of Vietnamese Marines to my right. A smoking shell splinter flew past my head and lodged in a nearby tree. I dug it out, the threaded portion burning a pattern into my hand. That was my good luck charm for the rest of the war.

The old Maxim was still methodically chugging along, when a F-4 came screaming out of the sun. Funny how they look like they’re heading right for you! The other bank exploded in a wave of Napalm. I’d had enough sightseeing. I held my rifle over my head and fired 2 shots at the opposite bank.. then split.

The South Vietnamese held the line at that river till ’75. Without our backing, the end was inevitable.